Now We Are Free

This has been an insane week over at Chez Wifely. So much is going on I don't know where to begin! We got the “go” and now 'rents are gearing up for their move to L'Étoile du Nord at the end of next month. I'm running around like a headless chicken trying to put together furniture for their new place. At 92 and 94, they cannot be camping out in sleeping bags the first week. Wednesday morning, unbeknownst to me, my iPod Touch managed to do a header outta my pocket in order to spend 8 hours in a very clean toilet. Thursday was spent worrying about said iPod Touch. Friday, I skipped outta work early and went to look at a headboard for the folks, and replaced the kitchen chairs instead...finally having found gorgeous Danish modern chairs with rush seats that match the teak kitchen table perfectly. It's true, I am a total sucker for mid-century (especially Danish) modern furniture...and I found this little store called MIDMODMEN on University Avenue at Raymond.. everyone has to swear to do everything in their power to keep me the hell away from there. OMG. There was this chair.........

And my first Passover as savta is coming up fast since the holiday from hell starts this Friday night and even though I'm making the second seder Saturday night, I gotta get 99% of the stuff done before Shabbat starts on Friday at sundown. I'm already thinking about all the traditions and green glass plates I have to hand down to my granddaughter.

Not to quote stuff seen on Facebook, but a conversation on my cousin Barry's page got me to thinking. We all love Barry dearly, even when he was trying to found the Civil Wrongs party back in the 60s. These days, however, he seems to be more of a pragmatist...and is the resident cynic over at Tom Sumner's ARMCHAIR POLITICS program on Flint's WKUF-LP radio. Which brings me back to his FB page and some of his weird friends. Like the one who thinks all states and the federal government have all passed the same Religious Freedom Restoration Act. The back-and-forth in the comments was enough to make me wonder why people don’t read stuff before they go off ranting about it. Barry came off like the voice of reason.

Which made me wonder about RFRA laws and the differences between them. 20 states and the federal government have theme and variation of the law…are they all equal?

The Atlantic ran a brilliant article, What Makes Indiana's Religious Freedom Law Different and I would highly recommend everyone read it. Garrett Epps has done a bang-up job explaining the differences between the federal law and the ones passed by 19 other states. There are some glaring differences, and Indiana's version of the law is significantly different from most of the others in two important aspects:

The federal version, and most of the state versions, specifically exclude for-profit business from the "free exercise of religion," something that has traditionally been limited to religious organizations and private non-profits. By allowing for-profit institutions to exert that right, it opens the door.... or rather, closes the door.... to anti-discrimination laws.

And the new law goes even further than that. The language of the second part provides a valid defense for businesses or individuals choosing to discriminate in the case of a lawsuit. If you think that's far-fetched, think Hobby Lobby and their recently sanctioned ability to deny their employees access to contraception under their insurance policy.

I suppose one can say this is a state's right issue, but it really isn't. This is an "equal protection under the law" issue and not one that can be legislated in a local legislature. If that were the case, we would probably still have slavery in the south. But we don't. We are 50 united states and as such, citizens on the nation are entitled to a standard of equal protection across the country. Civil rights cannot shift between state borders; they must be consistent.

When we turn our backs on our own citizens, when there is an attempt to deny civil rights to a group or a class, when we declare that all people are not created equal, we are digging our own national grave.  We lose that one thing that made us the hope of the tired, the poor, and the huddled masses yearning to breathe free. We betray everything We, the People, have striven to represent in this world.  Walk away from civil rights, and we walk away from the tattered remnants of what used to be called American exceptionalism. We become just like the rest of them. We emulate the Venetians who built the very first ghetto in 1510. We become the Inquisition, the Nazis, the Taliban, and ISIS, all organizations that separated people into a hierarchy of who was okay…. and who was not.

I don’t know about any of you, but the answer to that question scares the hell outta me.

Oh, yeah. The iPod is just fine. And yes, I used the bag o'rice method to dry it out. Gotta be thankful for the little things.

The Wifely Person’s Tip of the Week
For fluffy matzah balls, use seltzer instead of water or broth, and
separate your eggs; beat the whites to soft peaks before folding them into the rest of the stuff.

Eyes on Your Own Paper, People!

Okay...time for a US History Pop Quiz:

Who qualifies to be president?

If you chose “g,” you’ve chosen poorly ~ you’re a birther and really need to either go to school and listen this time, or, at the very least, learn to read.

If you chose “f,” you’re closer but still wrong.

If you chose e, you’re actually know something about this country. Anyone who has half a functioning brain knows that the earliest presidents (8 of the first 9, with Martin Van Buren being the exception) were born British subjects; they could not possibly be born to American citizens because there were no American citizens before June 18th, 1787. If I have to explain that, then maybe you should just skip voting until you have this psyched out.

The first version of the Act of Naturalization was passed in 1790. So, here are the people to whom the choices apply:

a)    John McCain – born in the Canal Zone while his dad was stationed in Panama. Kinda the same for Mitt's dad George Romney who ran for president in 1968 was born while his folks were living in Mexico.
b)    Ted Cruz –  born in Canada…making him a Canadian citizen as well as a US citizen. His mom was born in Delaware, and his dad, a Cuban, was not yet a citizen, but apparently had a green card. His dad was working for an oil company in Calgary, Alberta. By virtue of his mother’s citizenship, he is considered “natural born.”
c)    Barack Obama – born in Hawaii (which was already a state) to an American mother from Kansas and a Kenyan father. Because he was born in the US, he is automatically a citizen. That his mother was American is nice, but he would still be a citizen without her. His father doesn’t matter at all.


d)    George Washington. He was a resident when America became the United States, and was therefore considered a “natural” citizen and was eligible to be President…as were John Adams, Thomas Jefferson, James Madison, James Monroe, John Quincy Adams, Andrew Jackson, and William Henry Harrison. (#8, Van Buren, born in 1782...after the Declaration of Independence, was a mere stripling…55 years old… when he became president in 1837.) 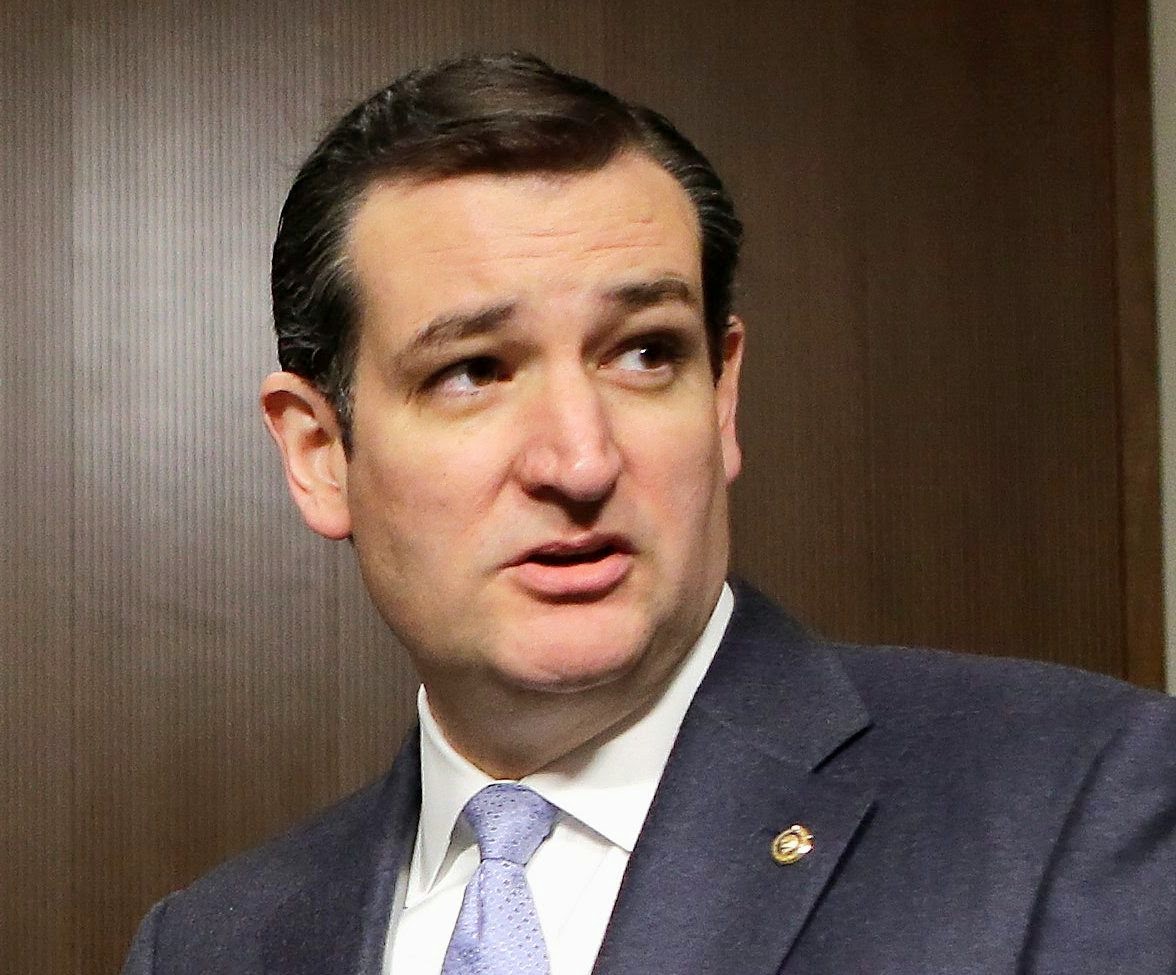 Now, does everyone have that straight? Ted Cruz, even though he was born in Canada and first renounced his Canadian-by-birth citizenship in 2014, is eligible to be president. So is, come to think of it, Bobby Jindal who was born in Baton Rouge, Louisiana to parents from Punjab, India.

Let’s get something straight right from the get-go: there will be no tit-for-tat birther baloney in this blog. Cruz and Jindal may be elitist, hate-mongering, misogynistic pond scum, but they are American pond scum and as such, have the right (certainly not the left) to run for POTUS.

But it’s Ted Cruz who has thrown the first hat into the ring. There are some fundamental things wrong with Cruz, not the least of which is his lack of experience with telling the truth. The guy has a Christie-sized problem with doing his due diligence on information. I suppose you can blame his peeps, but he has to own some of this, too. Stuff like “skyrocketing” insurance premiums; advocating for smaller government and not letting the government get between a person and HIS doctor, except that same paradigm doesn’t apply to women seeking comprehensive reproductive health care. Then it’s perfectly okay to interject the government, a magic wand, and whatever the hell else he thinks is necessary to prevent a woman from obtaining birth control. And for the son of an immigrant who was born in another country, his stand…or lack thereof…on immigration makes no sense whatsoever.  Still, enough people bought into his cockabarley to make him a Senator.

Now, here’s the part I don’t get: why announce the candidacy now?

It’s pretty clear that even as a teapot conservative this guy doesn’t stand a chance. He gives this whacko speech at Liberty University, the world’s largest Christian university…and it’s such a jumble of contradictions that who knows what the hell he stands for…that is when he’s not trying to channel John Lennon who would’ve probably sued the pants off him for even intimating there is a similarity between them. The papers are already skewering him into next week and beyond. This guy is a patsy.

Nope; he's no player. He’s a diversion. Someone set him up for this, and I think it was someone who is hoping he’ll seem to be so far to the right that Jeb’s gonna look like a centrist-moderate kinda candidate.

This is a wee bit o’sleight’o’hand meant to divert our attention for a moment so the "right" candidate can come on like the party savior. The GOP doesn’t have a reliable candidate, at least not yet, and they are gonna parade these guys like a perp walk until they can get a pulse on who is even remotely electable. 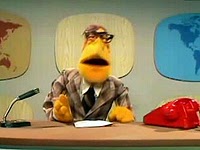 The morons are beginning to ooze out from beneath their rocks! Everybody ready?????

And I will make this solemn promise to you all: I will hock, I will rant, I will rave, and I will calls those sleazy morons a variety of names…but I will work diligently to get my facts straight. And if you catch any incorrectness, you let me know right away and I will correct it.

We’re talking about facts here…not opinions. I retain my right to opine at will. And I will opine so don't you be worrying your heads about that one.

The Wifely Person's Tip o'the Week
Shooting off  your mouth or your typing figure without vetting stuff is just plain wrong.
Got Google?
Use it