Are you sick of the Mueller Report yet? I know I am. And you wanna know why?

BECAUSE NO ONE TALKING ABOUT IT
KNOWS WHAT'S IN IT.

In case you didn't understand that last sentence, let me make it a little bit clearer for you:

BECAUSE NO ONE TALKING ABOUT IT
KNOWS WHAT'S IN IT.

I'm just about ready to switch to Hallmark Channel where all endings are romantic, happy, and no one get exonerated.

But before I head off to HappyLand, let me say this about that: they don't get more brilliant than Bob Mueller. He managed to keep the lid on this thing for two years. He's a smart cookie, and he knows he was given a specific scope within which he had to function. He could not step beyond those bounds without causing damage to the results of the investigation.  He crafted this report using every linguistic skill he had, still that doofus AG, William Barr, manages to write a summary that defies logic. In it, is included:

The Special Counsel states that “while this report does not conclude that the President committed a crime, it also does not exonerate him.”

See that little piece in red?  That, dear readers, is the rabbit hole.

William Barr said he read the entire report thoroughly enough to render that decision. Really? He slogged through the whole report, including the supporting documentation, interviews, bar graphs, and statements in 48 hours? Seems a bit implausible, until you remember his June 2018 memo about sitting presidents, the presidency, and law. Read it for yourself. It's a whopper: Mueller's "Obstruction" Theory. Because of that memo, Barr's summary automatically begs the question: did he make up his mind before the report was handed to him?

And that's what sent him following Alice right down the ol' rabbit hole of alternate reality and disbelief.

Strangely enough, this will force the release of the full report. Yes, the grand jury testimony with be redacted as specified by law, but even without this testimony, the report requires close scrutiny by people who actually can read. And read it they will because there is a huge problem with the summary versus Barr's previous statement.

Because Mueller's scope was so narrow. By orchestrating the release of the report, Mueller clears the way for the local, state, and federal probes to continue. The door to other indictments, as well as an indictment of a sitting president, remains open. This will get to SCOTUS one way or another.

Whether or not Feckless Leader will find himself in the hoosegow as the result of the Mueller Report is immaterial. More important is the ongoing investigation of criminal activities in regard to his business dealings. If I had to choose between taking this clown down with A or B, I am going for B. Exposing Feckless as a garden-variety crook is crucial to begining the recovery process in the country.

So, if you are reading this, if you believe in the need to uphold The Constitution of the United States, you need to sit down, shut up, and bide your time. Mass hysteria is not our friend, and it is not going to do We, the People much good. Inhale. Exhale. Inhale. Exhale. Let's Mueller's work do its work. This is a marathon, not a sprint, and it ain't over yet.

Ooooh look! THE PRINCESS BRIDE is on. That takes precedence, even if it isn't on Hallmark Channel.

The Wifely Person's Tip o'the Week
If you have Netflix and haven't watched Shtisel, go watch it.
Doval’e Glickman and Michael Aroni are  brilliant
Totally binge-worthy.
Posted by The Wifely Person at 9:44 PM 2 comments:

Over the weekend, I was getting ready for Purim (happily) while following the news from Israel (not so happily.)

I read about the "mistake missiles" scenario and Israel's response. I also read about the terrorist attack at Ariel Junction on the West Bank. And then I read about the Palestinian response to deaths of two Israelis and the wounding of others:

The Islamic Resistance Movement, Hamas, on Sunday hailed the "heroic" anti-occupation shooting operation near Ariel settlement in Salfit earlier in the day.
Hamas said in an official statement that the attack came in response to the Israeli crimes against the Palestinians and the latest attacks on Palestinian worshipers at al-Aqsa Mosque.

"This courageous and bold operation affirms that resistance, in all of its forms, is the most powerful and successful option to deter the occupation, foil its plans, and protect and defend our people's rights and holy sites," Hamas said.

The Palestinian resistance group saluted the "heroes in the revolutionary West Bank" and stressed that the Israeli occupation will never succeed in undermining the Palestinian people's determination.

Two Israelis were killed on Sunday morning and two others injured in a Palestinian stabbing and shooting attack near Ariel settlement in the West Bank province of Salfit.
Palestinian Information Center: Hamas Praises Salfit anti-occupation attack 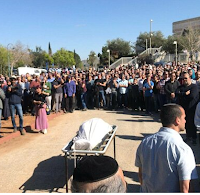 The two Israelis who died? A young soldier defending the crossing, and a rabbi who turned around and came back to throw himself into harm's way to protect others. What did either of these two people do in that moment to warrant murder?

When I read stuff like this from a Palestinian source, I gotta wonder who in their right mind thinks this is part of a resolution to the conflict? Their words and the actions match perfectly: they bomb, they hand out candy and stipends. They celebrate death.

Belén Sisa, a member of Bernie Sanders' staff, is a woman without US citizenship and protected by DACA. She wrote on Facebook:


This is a serious question: do you not think that the American government and American Jewish community has a dual allegiance to the state of Israel? I’m asking not to rule out the history of this issue, but in the context in which this was said by Ilhan.


Really? Does she think Bernie has dual allegiance because he's Jewish? Or is she just suggesting, like Ilhan Omar, that Jews are suspect because they believe Jews are indigenous to Israel? I wonder how she feels about the indigenous peoples of Argentina: the Aonikenk, Kolla, Qon, Wichi, Diaguita, Macovi, Huarpe, Mapuche, or Guarani.

Her word most certainly matter.

This reminds me of something I didn't understand when I was a kid. A really handsome guy with red hair was running for president, and there were some people who said he couldn't be president because he was a Catholic and that everyone knows Catholics' allegiance is to the pope in the Vatican, and if one of them got elected, he would be the puppet of the pope. There was some pretty heated debates about that, and people said some terrible things about Catholics.

Now, all things considered, in my world there were only two kinds of people: Jews and Catholics. I didn't know any Protestants even though my Girl Scout Troop met in a Methodist Church. No one I knew went there. I knew some of my friends believed the pope was the last word in a lotta things, but then again, our rabbi was the last word on a lotta things, too. it never occurred to me that thinking that would prevent someone from being President of the United States.

I asked my father to explain it and he did. Pretty thoroughly. He explained prejudice. And how discrimination worked. And how we were slaves in Egypt and that Torah explicitly said we had to remember that and welcome the stranger and the newcomers to our country. This was a Republican talking, by the way and this was my introduction to Civil Rights.

John F. Kennedy, that guy with red hair, faced the opposition head on. At a meeting with ministers in Houston, he stated:

His words mattered. A lot. He got elected.

Brenton Harrison Tarrant, the shooter in Sunday's New Zealand massacre, published a 74-pate manifesto, including a "self-interview  before streaming his actions on social media:


Were/are you a supporter of Donald Trump?

"As a symbol of renewed white identity and common purpose? Sure. Sure. As a policy maker and leader? Dear god no.”

His words matter, too; they are like the gates of hell. 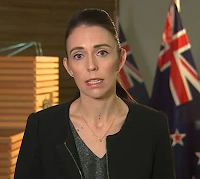 As a cabinet, we were absolutely unified and very clear. The terrorist attack in Christchurch on Friday was the worst act of terrorism on our shores. It has exposed a range of weaknesses in New Zealand’s gun laws. The clear lesson from history around the world is that to make our community safe, the time to act is now…. Within 10 days of this horrific act of terrorism, we will have announced reforms which will, I believe, make our community safer.

I want to believe her words will matter and the Kiwis will rid the streets of automatic weaponry.

On the other hand, this was Feckless Leader's response:

His words matter...but not the way he thinks they do.

There is a lot of unjustified hate in the world right now. Jews are easy targets just as Muslims are. As long as the White House refuses to step up to recognize that these are hate crimes committed by White Supremacists, they will continue to happen. How many more Charlottesvilles and Pittsburghs do we have to endure before the White House steps up the plate?

Silence is not golden. It's pretty much the same as condoning the action. I do not think there is a shred of doubt where this president stands on hate, racism, antisemitism, and truth. None of those terms are familiar to him.

Those words matter most of all.

The Wifely Person's Tip o'the Week
Sticks and stones may break your bones,
But words can have a devastating impact, far beyond what you thought.
Words do matter.
Posted by The Wifely Person at 11:35 PM 2 comments: