If you're a news junkie, you have to notice a certain amount of back peddling these days. Seems to me that all those nasty things would be candidates were saying about Mittens the Bore are coming back to bite everyone. Suddenly, he's the hair presumptive and everyone is jostling for position.
That's fine. They should please pick someone and get the rest of the ToonTown Trolley Clowns off the stage. Enough already with the junior high politics and their promises of more pizza at lunch. It's complete and utter bulloney and everyone knows it.
So now, the business of the campaign will start in earnest and this is interesting all by itself. People you thought had been hustled off the stage are suddenly back with bizarre statements in an effort to draw attention to themselves. Sarah Palin's response to the Secret Service InappropriateBehaviorgate clever way to remind us how really out of touch with the real world she is...which is not necessarily a bad thing. Even La Bachmann is appearing on chat shows. What? Suddenly she wants to run for Vice President?
But will this finally bring about a news cycle under control? In our dreams. It’s now open season on anyone who has ever shaken hands with a politician. Bring back Joe the Plumber!
Meanwhile, there’s this quote being attributed to Anne Romney:
“Why should women be paid equal to men? Men have been in the working world a lot longer and deserve to be paid at a higher rate. Heck, I’m a working mom and I’m not paid a dime. I depend on my husband to provide for me and my family, as should most women… and if a woman does work, she should be happy just to be out there in the working world and quit complaining that she’s not making as much as her male counterparts. I mean really, all this wanting to be equal nonsense is going to be detrimental to the future of women everywhere. Who’s going to want to hire a woman, or for that matter, even marry a woman who thinks she is the same, if not better than a man at any job. It’s almost laughable. C’mon now ladies, are you with me on this?”
The original appear in FREE WOOD POST, a website that bills itself as "News that's almost reliable." You think that would be a big hint? Apparently not. Now, this is the second time in two weeks I've found myself defending Ann Romney. Frankly, I don't like the woman; she comes off as smug and smarmy; not exactly someone I ask over for coffee. But.....
And this is one big, giant butt...

Putting words in her mouth and setting it up to appear as real news is cruel, deceitful, and decidedly not funny. Actually, it meets the definition for both defamation and libel, and the intent is clearly to harm Mrs. Romney. This went beyond the bounds of comedy; it was clear from the presentation of the piece that it was meant to masquerade as a genuine news article. Make fun of the candidates, fine. Make fun of the candidate wives' clothes, fine Who cares? No one. But when you attribute vicious remarks to a woman who is not a candidate, thereby making her somewhat off limits, you have crossed the legal line. Look, I'm all for a good laugh, but there needs to be a line drawn someplace and this may be it.
The truth is that the five second news cycle leaves little time to digest what is happening while creating a voracious appetite for news. And to feed that appetite, every fart is flashed across the globe as a breaking news update. The result is not increased understanding; it's the manufacture of non-news that obfuscates understanding the real issues. Ultimately, this feeds the stupid cycle: people are used to dumbed down crap news that they begin to believe anything said with gravitas by a talking head. How else can you account for people believing FOX NEWS? 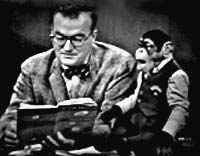 And speaking of tv news, last week I wrote a letter to the TODAY show explaining why this viewer, whose addiction to the show began with Dave Garroway and  J. Fred Muggs, has switched to CBS's morning show. I told them I couldn't stand the never-ending Kardashian report. Thank G-d I’m already at work when that horrid hour of Kathy Lee and Hoda Kotb comes on. Talk about brain-dead air! I used to like Ms Kotb back when she was a journalist but aligning herself with that brainless twit has sucked all the credibility out of her. How does she look in the mirror?
I don’t expect an answer from NBC, but I was thinking that if enough people wrote to complain, maybe they’d take it seriously.
Or not.
Wifely Person Tip o'the Week
Disgusted by what you see on television news? Write a letter.
Word is that letters are taken seriously since people actually have to sit down and write them.
Posted by The Wifely Person at 11:19 PM