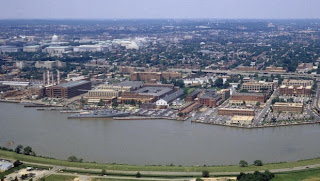 This morning, at about 8:15 AM Eastern time, a gunman began shooting at the Navy Yard in Washington, DC.  CNN reports he was initially armed with an AR-15 rifle and a semi-automatic Glock. When it was over, 13 people were dead, including the shooter. [Updated information: the shooter was not carrying an AR-15. CNN is reporting that a shotgun was recovered and it is believed he brought that into the compound.]

Tonight, there were no cancelled programs. The Million Second Quiz went up on schedule. Some piece of drek called SLEEPY HOLLOW premiered on Fox (about three minutes of listening to Ichabod Crane explain how George Washington called him into his tent to ask him to save the world was definitely more than enough to know this had nothing whatsoever to do with Johnny Depp, much less Washington Irving.) And I had trouble finding a straight line time line of the shooting in the usual news junkie haunts. This was all very bothersome.

Wanna know what I wanna know? I wanna know why there isn’t an ongoing conversation about gun control in this country that doesn’t sound like adversarial harangues. I wanna know why after Columbine, Virginia Tech, Newtown and that almost-was at McNair Discovery Center in Decatur, Georgia…all of which involved assault weapons, we still cannot find a way to keep them out of our schools, much less make them out and out illegal to own. No one uses them to kill Bambi and to date they seem to be the weapon of choice for mass shooting sprees. I wanna know why after 8,232 shooting deaths since Newtown, our Congress still cannot have a conversation that recognizes gun violence in this country is an issue. And I wanna know how come a gunman can waltz into a military installation like the Navy Yard with a gun even if he as a valid pass. Or did no one notice he was toting a rifle?

With more than 200 mass shootings (4 or more people killed constitutes "mass") in the United States since 2006, I am stunned that there isn’t a single CongressClown in the lot who is willing to stand up and call the rest of them irresponsible loonies for not taking this on. How can it be that after Fort Hood and Newtown this isn’t front and center on the congressional table? And how is that Colorado managed to recall elected officials who were pro gun control without the rest of the state going completely berserk?

And this is all brought to you by the same people who have their bungies in a knot over gassing 1000 people in Syria, but it’s okay to kill 8,232 with guns? Granted both are terrible tragedies, and both, theoretically are preventable, but one of them isn’t being perpetrated by a single, maniacal despot. One of them is being perpetrated all over this country by people who can hop over to the local Wal-Mart to pick up an AR-15 along with their skim milk and toilet paper. How is that okay?

A couple of years ago, I wrote about the tradition of Ushpizin in the sukkah. Well, this year, if I were to list the folks I want to visit my sukkah, it would look more like the Constitutional Convention. I’d ask Benjamin Franklin, John Rutledge, George Mason, and Robert Yates for sure. Add to that George Washington, James Madison and Alexander Hamilton. I think I’d invite John Adams and John Hancock who weren’t at the convention, but would be good to have at the table.  And the first thing I would ask them to discuss is “what the hell did you mean by “A well regulated Militia, being necessary to the security of a free State, the right of the people to keep and bear Arms, shall not be infringed.”

The Founding Fathers weren’t prescient and they weren’t perfect. It becomes the job of subsequent generations to build on the framework they gave us. The lack of gun control in this country is turning us into a nation of victims; no one is safe. And owning a gun does not make one safe; it makes you a bigger victim.


We, the People are rapidly reaching a denouement on the matter of gun laws and gun control. We can continue to allow our CongressClowns to be bought and sold by the gun lobby like so many head of sheep, or we can insist that they stand up for our right to be safe on our streets and in our public spaces.

This is an issue of national importance. We, the People, have choices here. Sitting back and saying, “nothing is going to change this,” should not be one of them.


Wifely Person's Tip O'the Week
Do everyone you know a favor: write to your very own CongressClown;
tell him/her what you really think about gun control.
Posted by The Wifely Person at 11:27 PM