Due Process, Alternate Reality, and Who Cares? 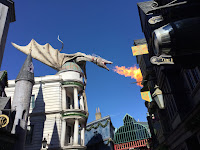 I am sitting in my room at the Hard Rock Hotel in Orlando. Let me just say that I am having a really good time. I loved Diagon Alley and all the shops come to life. Didn't buy a thing, although I confess I was really tempted to get a wand. However, everyone knows the wand chooses the wizard, and there didn't seem to be a wand that chose me. Alas.

I know it's the night before the highly anticipated Panorama in Alabama. I know, too, that tons of money have been pouring into Alabama for Mr. Jones. And I know this is going to be ugly no matter what happens. But I also know this is a bellweather election for these here United States, and that no matter who the people elect, they will own that choice. They have the right to send anyone they want to the Senate.

That's the beauty of democracy, and the curse. I don't know how much longer We, the People, will be able to preserve this union. The moorings and the underpinnings have taken a few severe hits in the last 6 or so months. We are no longer standing on such firm ground. And it breaks my heart.

And it breaks my heart that Senator Klobouchar betrayed the trust of the people of Minnesota by joining the warlock hunt demanding the resignation of Senator Franken. Senator Franken was denied due process despite his call for an ethics investigation. He was denied the right to answer their questions.

And it breaks my heart that the Democrats of the Senate not only betrayed their own colleague, but they betrayed any woman who has suffered violence and serious trauma at the hands of a rapist. They have equated a fanny pat with full-blown, forced, violent, vicious sexual intercourse. Anyone who has experienced that violence knows there is a difference. A BIG, WHOPPING DIFFERENCE.

Some of the allegations against me are simply not true. Others, I remember very differently.

But when Sarah Huckabee said,

we were expected to take his word for it even though there's video tape where he brags about forcing himself on women. Okay. Why not? Lots of people also believe the Palestinians want peace. 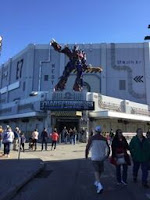 And y'know, none of it means squat. We are too far off the road for redemption.

What matters is that I went on THE TRANSFORMERS ride at Universal Studios today and it was the best ride ever. Escape from Gingrott's was good, and RACE THROUGH NEW YORK was pretty exciting, but TRANSFORMERS RIDE was amazing.

Tomorrow, we start with Hogwarts, then later in the day we move to Cape Canaveral. 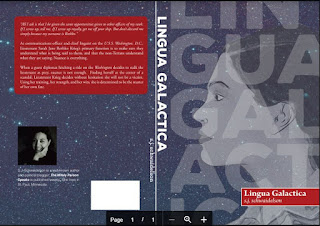